As far as demonstrations of anti-drone defence technology goes, it remains one of the most high-profile examples.

Back in 2018, an American entrepreneur was holidaying in the Caribbean when he spotted a 140m+ superyacht in the distance.

Intrigued, the entrepreneur decided to take a closer look – not in person, but by flying a camera-toting drone he happened to have with him towards the vessel.

The businessman documented what happened next in a YouTube video post, which was widely picked up and reported across the drone industry and enthusiast press. As his drone approached the vessel, his first-person view screen from the onboard camera blacked out, and he lost all control. He could still see his drone flying, so he switched his controller on and off again in an attempt to re-establish a connection. Momentarily, his video feed worked again, showing him a guy stood on the deck of the mega yacht holding some kind of device.

The story ends with the entrepreneur managing to regain control over his drone and hot-footing it out of there. It was never confirmed whether some kind of drone-jamming or control signal takeover device was used on his drone, but it doesn’t take much to make the equation add up – a high-profile billionaire, on his yacht, not liking the idea of drones snooping around.

Anti-drone laws behind the curve

Unfortunately, the legal status of drone defence technology – solutions that actually go so far as block or stop a drone flying where it is not wanted, as opposed to just detecting it – is something of a sore point. In many places around the world, including the UK and US, taking actions to block a drone without explicit prior authorisation remains illegal.

And yet at the same time, authorities recognise the need to address the growing threats that increasing and unregulated drone use pose. It’s just taking a long, long time for the regulations to catch up with the realities on the ground (or in the air, as the case may be).

In the meantime, superyacht owners are having to make decisions about whether or not they take matters into their own hands.

The market for commercial and recreational drones is growing rapidly. Latest forecasts suggest that it could double in size to be worth $58.4bn by 2026. That adds up to a lot of extra drones – also referred to as unmanned aerial vehicles, or UAVs – in our skies.

There are plenty of very good reasons why drones are taking off in a big way. Commercial applications for drones make for an ever-growing list, covering logistics, media and entertainment, emergency response and a whole range of surveillance and surveying uses in industries as diverse as security, law enforcement, agriculture, construction and conservation.

Yet such rapid growth is not without its problems. Unchecked flying of drones has already caused the temporary shutdown of Gatwick Airport, they’ve become a common tool used to smuggle contraband into prisons, while more sinister incidents have included an apparent assassination attempt against Venezualean President Nicolás Maduro by a drone carrying a bomb.

High-profile, super-rich yacht owners of course have reason to fear that they, too, could be targeted by someone with a vendetta looking to harm them or their loved ones, or at least do expensive damage to their prized asset. But the main reason yacht owners should have reservations about the growing number of drones in the sky is more to do with privacy than personal security. 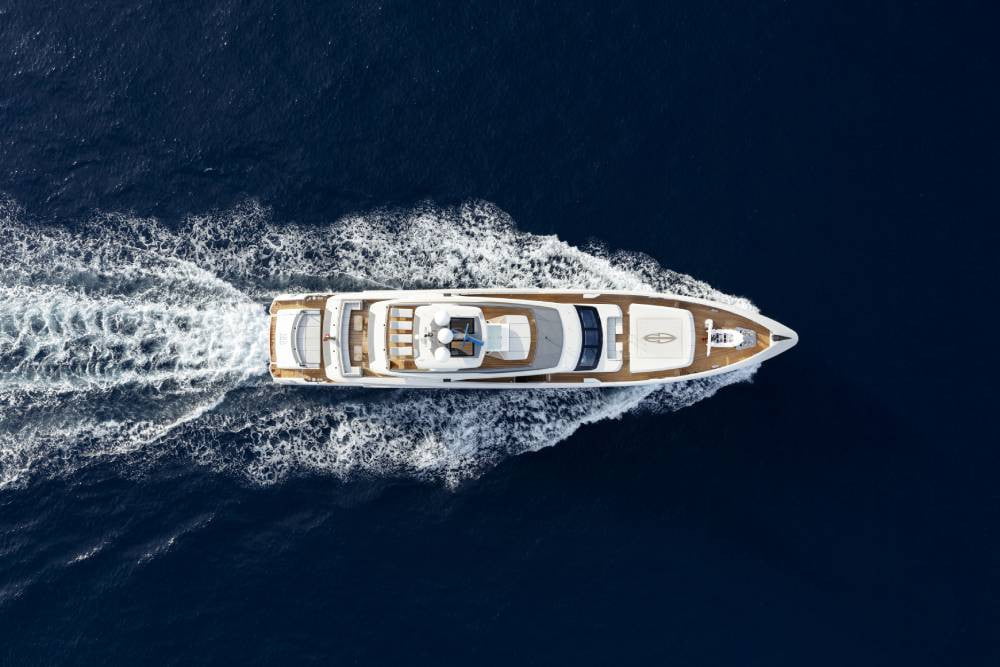 Superyachts of course attract attention. In the past, the most a wealthy yacht owner had to worry about was a member of the paparazzi with a telephoto lens, or the occasional member of the public punting around in a small boat. Now, as the American entrepreneur incident demonstrated, anyone with a drone who fancies having a snoop around a superyacht can do so.

With longer ranges, higher resolution cameras and, crucially, ever falling prices, advances in drone technology and ready availability mean even yachts anchored a distance out at sea can find themselves the subject of unwanted attention from a drone. At the bottom end of the threat scale, it amounts to a breach of personal privacy, with the potential for photos of the yacht owner, their family, and guests to end up all over social media or the press.

Higher up the scale, there is the risk of more targeted intrusions to spy on business dealings and/or try to steal sensitive financial or commercial information. The threat of espionage posed by a UAV doesn’t end with an onboard camera. Drones can also be used as vectors for hacking into onboard IT systems via WiFi, giving malicious actors free rein to steal sensitive data from connected devices, or even take over control of the vessel and hold the crew and passengers to ransom.

No one would argue that yacht owners don’t have a right to protect themselves from these threats, anymore than they are justified in having anti-intruder security systems on board. But the question is what mitigating steps are allowed under current law.

Drone defence and the law

It’s a complicated area, for two main reasons. One is that there is currently little consensus on drone defence regulations from country to country, which makes the rules difficult for yachts to navigate when they move from jurisdiction to jurisdiction. What is allowed when you are moored up in one harbour might not be allowed in the next country you visit.

The other issue is that drone regulations are being formulated as part of aviation law. In many countries, again including the US and UK, it is a principle that any action taken to interfere with or halt the flight of an aerial vehicle, whether manned or unmanned, is a big no-no.

In the US, for example, drone regulations formulated under the Federal Aviation Authority (FAA) have focused on attempting to license all drone owners and users, and establishing permissible zones where it is ok to fly. Aside from the fact that this serves to greatly restrict legitimate drone activities, criticism of this approach has centred on the fact that the FAA overlooks, with one or two notable exceptions for military and government purposes, the use of any kind of technology to enforce no-fly areas.

So, from the maritime sector’s perspective, port or harbour authorities might apply for no-fly status to protect against drone intrusions. But even if that is granted, should someone choose to ignore it, there is little anyone sitting on a yacht watching a camera drone hovering overhead can do in the moment. They can use drone detection equipment which tells them when and where a drone is flying, and take steps to try to identify who is flying the UAV with a view to a future prosecution.

But in terms of trying to stop the drone flying over them, filming, being used to hack into the boat’s systems or even posing a physical threat of one kind or another, the law is against them. This is sadly the situation in many countries.

It has been demonstrated that so-called radio signal jamming technology – devices that blast radio waves at a drone at the frequencies most commonly used to control them, thus interrupting their contact with the pilot – are the most effective drone mitigation solution available. Once the control signal is disrupted, the drone will either land where it is, or turn around and fly back to where it took off from.

Sooner or later, regulations around the world will catch up with the demand from private citizens and corporations – not just national and military institutions – to be allowed to run effective, reliable, fit-for-purpose drone defence systems. The UK’s Counter Unmanned Aerial Strategy, for example, acknowledges the need in some circumstances to go beyond measures that ‘detect, track and identify’ to also ‘effect’ an appropriate response – in other words, take immediate action against the drone threat. Government-sponsored testing of ‘effector’ defence solutions will commence once an authorisation framework has been agreed.

In the meantime, yacht owners and captains will have to continue to make their own decisions about the measures they feel are necessary and proportionate to protect privacy and safety onboard.

A.I.M is at the forefront of drone defence solutions, combining cutting-edge technology with world-class privacy and security expertise.

Send us an email

HOME
SECTORS
DETECTION
MITIGATION
ABOUT
BLOG
GET A DEMO
CONTACT

This website uses cookies to improve your experience while you navigate through the website. Out of these, the cookies that are categorized as necessary are stored on your browser as they are essential for the working of basic functionalities of the website. We also use third-party cookies that help us analyze and understand how you use this website. These cookies will be stored in your browser only with your consent. You also have the option to opt-out of these cookies. But opting out of some of these cookies may affect your browsing experience.
Necessary Always Enabled
Necessary cookies are absolutely essential for the website to function properly. This category only includes cookies that ensures basic functionalities and security features of the website. These cookies do not store any personal information.
Non-necessary
Any cookies that may not be particularly necessary for the website to function and is used specifically to collect user personal data via analytics, ads, other embedded contents are termed as non-necessary cookies. It is mandatory to procure user consent prior to running these cookies on your website.
SAVE & ACCEPT